Home » Articles » News » Remember in November: Scenes from We Are Woman Rally

Remember in November: Scenes from We Are Woman Rally 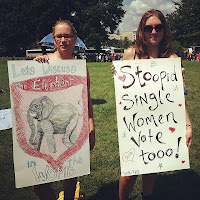 The video that inspired the cofounders of We Are Woman was titled, “We are Warriors.” As their national rally for women’s rights came to a close last Saturday in Washington, D.C., the members of We Are Woman did indeed feel like warriors.

Saturday’s rally attracted more than a thousand women, men and children to the west lawn of the Capitol grounds. Opening with an impassioned speech from beloved  Rep. Eleanor Holmes Norton (D-D.C.), the rally continued for a full five hours of inspirational words, music and comedy.

Planned Parenthood was there. NOW was there. CODE PINK danced on the sidelines in their furry vagina costumes.