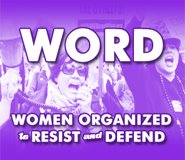 WORD (Women Organized to Resist and Defend) is a new grassroots, feminist organization that is dedicated to building the struggle for women’s rights and equality for all.


On Women’s Equality Day, August 26 – on the eve of the Republican National Convention in Tampa, Florida, which will be immediately followed by the Democratic National Convention - women and their allies will take to the streets of Los Angeles, San Francisco, New York City, Chicago and other cities across the country in defense of women's rights. 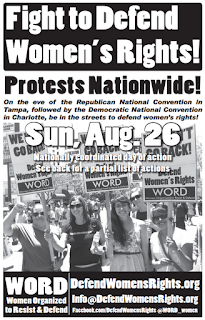 Women’s reproductive rights continue to be slashed at the state level. Legal restrictions on abortions tripled from 2010 to 2011. 92 new abortion restrictions were enacted in 2011. In 2011, there were 114 reported violent attacks against abortion providers. Clinics that provide vital services for millions of working-class women are under siege. More than 55 percent of reproductive age women now live in states that are “hostile” to abortion rights. (Guttenmacher Institute)

So while they’re convening and concocting new ways to attack our rights and our lives, let’s come together in the streets to stand up and fight back!

There will be mass demonstrations in Los Angeles, San Francisco and other cities around the country. We will mobilize thousands in the streets to show the world that there is a new women’s movement rising and we will not go back.

We believe that access to reproductive choice – the basic right of women to control our own bodies – is a fundamental right and must be defended. We believe in equality. We support working women. We are tired of the right wing trying to turn back the clock and take our hard-won rights away. All people who support equality and choice should organize with us and help these actions grow.

If you can’t make it to protest in Tampa and Charlotte, join or organize a protest in your community. There is a long, proud tradition of women in the United States mobilizing and fighting to win equality and respect. Let’s continue this legacy this summer!

If there's an Aug. 26 event taking place in your area, please let us know about it so it can be listed on our website.

16th Street Mall, (meet at 16th St and California), 11 am
Die-in to raise awareness women who have died as a result of inequalities.
Organized by We are Women Colorado

If there's an Aug. 26 event taking place in your area, please let us know about it so it can be listed on our website.


Call to Action initiated by WORD (Women Organized to Resist and Defend) is a new grassroots, feminist organization that is dedicated to building the struggle for women’s rights and equality for all.