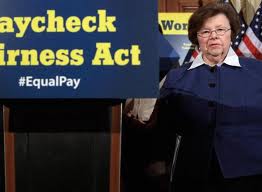 On May 23, 2012, Senate Barbara Mikulski (D-MD), the longest serving female in the Senate, introduced the Paycheck Fairness Act calling for equal pay in the workplace. On June 5, 2012, ALL Senate Republicans, including the women, blocked the bill. The names of the women who blocked the bill are; Sens. Kelly Ayotte (N.H.), Susan Collins (Maine), Kay Bailey Hutchison (Texas), Lisa Murkowski (Alaska) and Olympia Snowe (Maine).

“We already have on the books the Equal Pay Act, the Civil Rights Act and the Lilly Ledbetter Act, which I did support. I believe that they provide adequate protections."

Clearly they do not provide “adequate protections” Ms. Collins, or women would not be earning $.77 to every dollar a man earns. As for Ledbetter, which I thank you for supporting and President Obama for signing, the bill evens out the playing field for women to sue for wage discrimination but it does absolutely nothing to address wage parity. Ledbetter in conjunction with the Paycheck Fairness Act, however, would have put a real dent in wage discrimination because it would have closed easy to slip through loopholes thus making the law easier to enforce. Just so you know Ms. Collins the gap in earnings between men and women, "translates into $10,784 less per year in median earnings, leaving women and their families shortchanged."

Senator Mikulski’s response to the Republican’s filibuster of the Paycheck Fairness Act was so brilliant I am re-posting it here in its entirely.

"Although we lost the vote today, we're not going to give up the battle. While it is a sad day here in the U.S. Senate, it's an even sadder day each day a woman earns less than a man doing the same job with the same education.

It's unfortunate that today's vote occurred strictly along party lines. It's my hope that we can bring this bill up again and forge a bipartisan vote.

As we come up on the 49th anniversary of equal pay for equal work, we're not going to let this bill die because of parliamentary entanglements. The majority should rule in the United States Senate.

While John Adams and all the guys were in Philadelphia writing the U.S. Constitution, his wife Abigail wrote him a letter that said, 'Do not forget the ladies or they will foment a revolution of their own.

Well, they did forget the ladies. And the ladies did foment a revolution of their own. It was called the suffrage movement. It took 150 years for women to secure the right to vote. And now they've forgotten the ladies again by not getting rid of the loopholes in the Equal Pay Act that are making it hard to end pay discrimination. But we're not going to wait another 49 years.

"So, I say to the women of America, let's keep this fight going. Put on your lipstick, square your shoulders, suit up and let's fight for this new American Revolution where women get equal pay for equal work. Let's end wage discrimination in this century once and for all."

So my darlings, let's take what Senate Barbara Mikulski to heart, let's end wage discrimination in this century once and for all. MARCH!!!