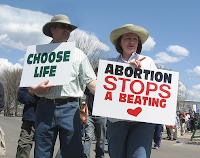 There was something of a charade of a tent revival going on this morning on the corner of Boulevard and Grove.

I sometimes think that the anti-abortion groups must have meetings where they all decide on which day to show up at the clinic.  Every other week is the Catholics’ turn.  This is when you see a lot of elderly white men saying their rosaries next to women who appear not to have bought a dress since 1992 but somehow look like they were also born about that time.  These are the weeks when it is difficult not to be lulled to sleep by the dull rumble of quiet voices saying their rote prayers and not doing much else.  The alternate weeks however, are apparently reserved for an ever-revolving team of aggressive prosperity gospel believers from Mt. Gilead church.  This week was an alternate week.

I could hear a few voices praying loudly as I came around the corner, returning a polite hello to the unaffiliated anti-abortion guy who is missing a necessary comma on his poster.   As I made my way to the north side of the clinic, I observed a group of three women singing, yelling, praying and reading condemnatory passages from the bible.  Immediately they saw me they began their predatory process.

Strange.  I hadn’t realized I was pregnant.

I went inside, got my orange reflector vest and came back out.  There was an audible gasp as the women saw that I was Clinic Defense but no one said anything.  I stood there as I have been standing for weeks, passing the slow morning daydreaming about the dress I’m making and how I need to alter the bodice.  A sudden whining sound intruded into my rather domestic reverie and I was startled to realize that it was one of the Mt. Gilead women spontaneously breaking into song.

She began to sing, very loudly, a song that seemed for awhile to have no other lyrics than, “Give me a chance!” and, “I want to live!”  After about twenty verses of this, our not very Grammy-worthy foe felt confident enough to add more complicated verses with words such as, “I’ve made some bad choices” and “it seems so easy to just pull the plug” and I realized, as I often do when I’m listening to anti-abortion protesters, how much their words and slogans reveal about their knowledge of women and particularly, desperate, sick or poor women.

“It seems so easy to pull the plug?”

As I stood there, a car came up the drive to park in back of the clinic.  A woman emerged from her vehicle and began to make her way toward me very slowly.  She was verging on elderly, though the misery in her face and gait probably made her look more so.  After a few minutes, she made it to my side and asked me if I would look out for her daughter who was going to be showing up soon with her boyfriend.  Her daughter was pregnant, she explained, and an ultrasound had revealed that the fetus inside her was dead.  This is a story to tug at anyone’s heart but for some reason it was this mother’s act of describing her daughter to me so that I might escort her past the 700 Club that really killed me.  As she was talking, her cell phone rang and she rummaged in her purse with shaking hands to answer it.  It was her daughter, telling her mother she was on her way but that she didn’t have a nice shirt to wear.  After hanging up, her mother told me that her daughter was experiencing severe grief and was not acting normal.  A few feet away, the church women were praying again, “You are under our feet, in the name of Jesus”.  The mother moved away toward the clinic to pay for the procedure, moving as slowly as she did before.

I stood next to the clinic driveway, waving traffic in and forming a rather inadequate one-person blockade between the clinic and the protesters.  Time passed and the church women and the man with the comma-less sign loaded their materials into their cars and drove away but I stood there and waited for the girl described by her mother as “very pretty and grief-stricken” who is not, apparently, finding it easy to pull the plug.
comments