We Have Not Forgotten the Equal Rights Amendment 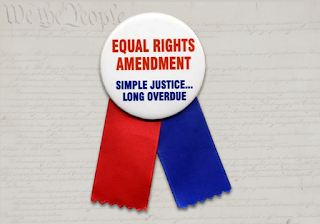 Please sign and share our petition and see below for the text on the 4 bills that we support. This has been going on for far too long. Although we realize that there are still 3 more states needed to ratify - it's still VERY important for us to let Congress and the President know that:

We still care,
We still want this,
and we are still fighting for it.
Let's get this done!
☛ Click Here To Sign ☚
- Or Sign Below-

For More Information See:
"Wouldn't it be nice if we had an amendment ... ?"

View the bills:
H.J.Res.47: Removing the deadline for the ratification of the equal rights amendment. (aka: The Three State Solution)
http://thomas.loc.gov/cgi-bin/query/z?c112:H.J.RES.47:

S.J.Res.21
http://www.govtrack.us/congress/bills/112/sjres21
The Text:
Proposing an amendment to the Constitution of the United States relative to equal rights for men and women.
Resolved by the Senate and House of Representatives of the United States of America in Congress assembled (two-thirds of each House concurring therein), That the following article is proposed as an amendment to the Constitution of the United States, which shall be valid to all intents and purposes as part of the Constitution when ratified by the legislatures of three-fourths of the several States:
‘Article--
‘Section 1. Equality of rights under the law shall not be denied or abridged by the United States or by any State on account of sex.
‘Section 2. The Congress shall have the power to enforce, by appropriate legislation, the provisions of this article.
‘Section 3. This amendment shall take effect two years after the date of ratification.’.
Please also sign this petition:
comments