"Along with others we marched, picketed, wrote letters and articles, talked to groups, and held rallies. But we also committed acts of nonviolent civil disobedience to bring attention to our cause. Some of us went to jail or were cited. Some of us testified in court. Some of us appeared before Congress. Sonia Johnson, the AHA’s first Humanist Heroine, was excommunicated from the Mormon Church for her support of the Equal Rights Amendment. Recognizing the link between religion, politics, and women, she gave a harshly critical speech at the 1979 meeting of the American Psychological Association titled, “Patriarchal Panic: Sexual Politics in the Mormon Church,” and the year prior she’d raised the ire of ERA opponent Orrin Hatch (R-UT) while testifying before the Senate Judiciary Subcommittee on the Constitution, Civil Rights and Property Rights. All of this happened nationally but is almost forgotten today, as is Sonia Johnson’s book, From Housewife to Heretic." Hidden from History by Cleo Fellers Kocol 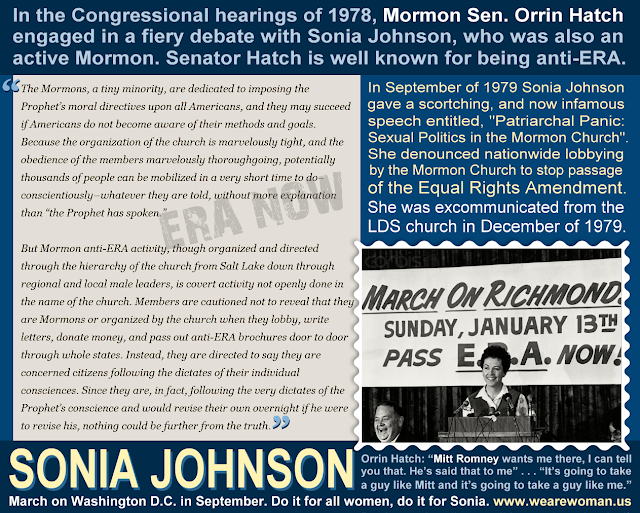 “We must remember that one determined person can make a significant difference, and that a small group of determined people can change the course of history.” Sonia Johnson

The following comes from: Examiner.com
Sonia Johnson and the Equal Rights Amendment
By: Clair Barrus
In 1972, congress passed a resolution to put the Equal Rights Amendment up for ratification in state legislatures.  The Equal Rights Amendment was designed to guarantee equal rights for both genders under federal, state, and local laws.
In October 1976, the First Presidency of the Church of Jesus Christ of Latter-day Saints issued a statement against the Equal Rights Amendment, concerned it "could indeed bring [women] far more restraints and repressions. We fear it will even stifle many God-given feminine instincts," and would promote "an increase in the practice of homosexual and lesbian activities."  In December they urged all stake & mission presidencies to "to join others in efforts to defeat the ERA" leading to LDS-coordinated efforts against the ERA in twenty-one states. 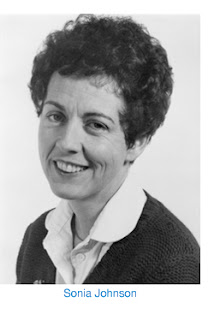 The church mobilized Mormons to participate in the International Women's Year (IWY) conferences.  In a show of opposition, fourteen thousand Mormons attended the Utah conference, voting down every proposal in the meeting including anti-pornography measures and calls for world peace.  The IWY conference in Hawaii was overwhelmed by Latter-day Saints who elected anti-ERA candidates for the national meeting in Houston.
Some Mormons favored the Equal Rights Amendment.  Sonia Johnson emerged as a pro-ERA Mormon leader, co-founding Mormons for ERA in 1977.
She notified Utah Senators Orrin Hatch and Jake Garn "since you have announced your intention to filibuster when the ERA extension bills comes before the Senate, I am announcing my intention to begin fasting on the Capitol steps in Washington as soon as the filibuster begins-a genuine Mormon fast, without food or liquid-and to continue until you stop talking or I die."  Mormons typically fast for special needs by skipping two meals.
Mormons Against ERA countered declaring they would hold "Family Home Evening" on the Capitol steps. The Utah senators decided not to filibuster.
Sonia Johnson rose to national prominence after testifying in August 1979 before a U.S. Subcommittee on equal rights.  She asked Mormon Senator Orrin Hatch how the church's statement against the ERA could discuss the "exalted role of woman in our society" while leaving women in a secondary status "where equality does not even pertain. ... One wonders if the leaders of the church would gladly exchange their sex and become so exalted."
In Sept. 1979 she further raised concerns of church leaders when she spoke to the American Psychological Association on "Patriarchal Panic: Sexual Politics in the Mormon Church."
☛ Read the Full Article
Further Reading:
Orrin Hatch: Obama Might Attack Mitt Romney On Mormon Faith
Senator Hatch’s Fanciful Power Play
Mittens’ Mormonism matters (and other heresies on Easter)
Is Mitt Romney's Candidacy Part of 'The Eternal Plan' of the Mormon Church?
LEDGERS OF THE LATTER-DAY SAINTS
Sonia Johnson
Irked by Sonia Johnson's E.R.A. Crusade, Church Elders Throw the Book of Mormon at Her
Hidden from History
The Women Who Ran for President
The Church and the Proposed Equal Rights Amendment: A Moral Issue