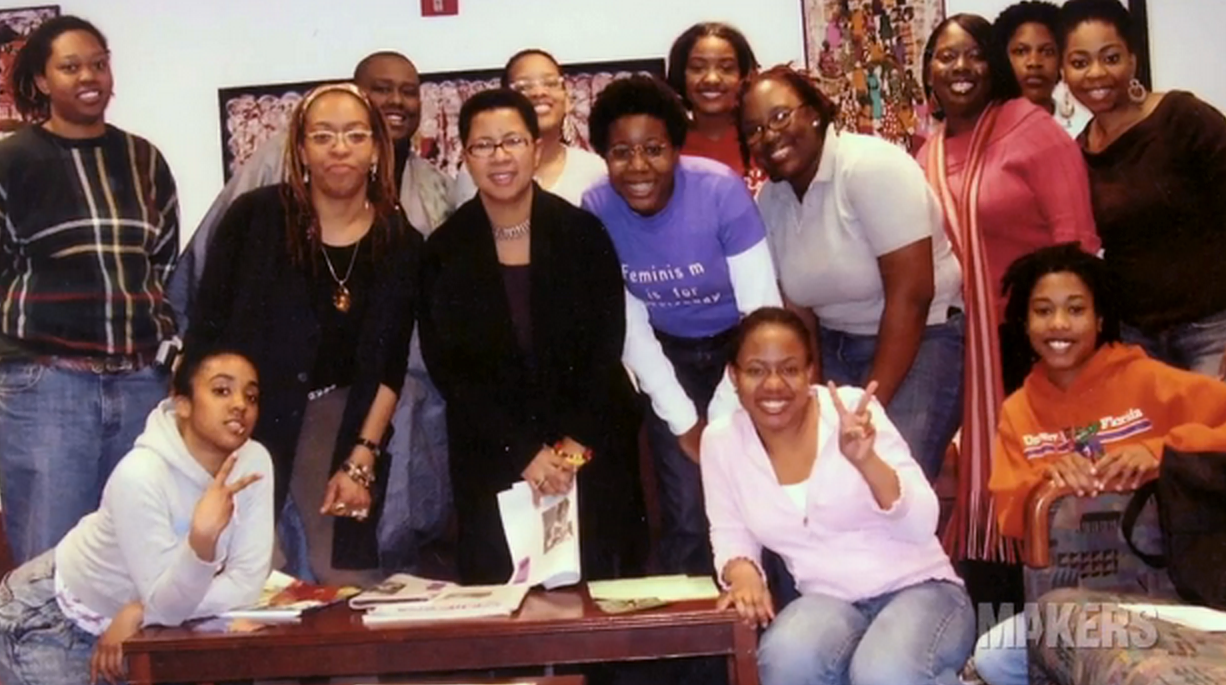 Rarely, if ever, are Black women interviewed in the neighborhoods where they live and asked about a policy’s impact on their lives. As such,on the days leading up to Women’s Equality Day, which is held each year on August 26, I felt it was high time for me to begin asking Black women in my community about their lived experiences with, and connection to, the laws that secured their right to vote.
(Photo Source: Makers "Long History of Black Feminism")

When I think about Women’s Equality Day, I reflect on the power and significance of Black women exercising their right to vote. And I am reminded of the ways in which the fight for women’s equality was a “crooked room” for Black suffragettes. As they stood on the front lines of organizing for women’s voting rights, they were also fighting to end the lynching of Black men and women across the South. Today, Black feminist activists continue this intersectional work, of having to protect our bodies, lives, and families by voting against legislation that aims to take away our human rights at the same time that we’re fighting to end sexist and gender-motivated violence as well as racist, state-sanctioned violence in our communities.

Most people, including women, don’t know or care much about Women’s Equality Day, except those of us who live and breathe women’s rights work. The cause of this can be largely attributed to sexism, plain and simple. For Women’s Equality Day, there isn’t the same level of attention paid to it that is given to federally recognized holidays, and we don’t get a day off work to reflect on its significance in American history, or our position in society as women voters.

So, I took to the streets of my neighborhood in West Philadelphia, interviewing two friends andeight other Black women. In this area, 75 percent of the residents are African American. It comes as little surprise that politicians and law enforcement have a challenging history with the Black community here.

Being new to Philadelphia, and this community, I was relieved to find that the Black women I spoke with understood the complicated history with the Women’s Equality Day and that it took a combination of the 19th Amendment and the Voting Rights Act of 1965 for Black women to have full access to the vote. These facts illustrate the Black feminist adage about how all the women are white, all the Blacks are men, and Black women, indeed, are brave.

I found during my interviews that I was not alone in thinking that voting matters. As Briana, 25, shared, “It matters for me to have a voice, and now that we have it, we should make sure that we use it.”

“It’s important that Black women have the right to vote,” added Audrey, 55. “But, a lot of them don’t take the opportunity to vote. They come up with a lot of excuses like, ‘Why should I do this, it’s not going to matter anyway?’ I always tell people, it does matter.”

Some Black women, as Audrey explains, are traumatized to inaction at the fear of being made visible. “A lot of Black women I talk to between the ages of 19 and 30 don’t vote at all. They come up with excuses of why they shouldn’t. I often talk to young women and tell them every vote counts, and their voice matters.”

But, having the right to vote is one thing, having the opportunity to exercise that right is another matter entirely, as has been made clear with voter identification laws that disproportionately affect women in this country. “We live with this idea of a post-racial, post-sexist society,” said Charmaine, 26. “There’s still a lot of work left that we can do, especially in Pennsylvania, which is trying to change the voter laws. The monster we are up against changes every year. We need to re-evaluate and adjust our tactics.”