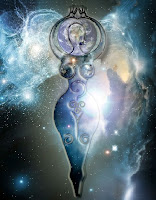 We live in a culture where the best and the worst of mankind have each other locked in place. Stick your arms out for a moment, straight out, let's say the right hand is the best of mankind and the left hand is the worst. They are points at either end of the same line, they are composed of the same. The best and worst of mankind have each other locked in place and the battle rages between these two points, the either and the or, for us or against us. Peace when it is attained is through defeat or compromise; the make-up of the line however remains the same so the battle will rear its head once again and will repeat ad infinitum.

There's a StarHawk chant, "She changes everything She touches, and everything She touches changes." The chant celebrates the alchemical, the transformative, that is intrinsic to the Sacred Feminine, the Goddess. All women have the ability to transform, ourselves, each other, life, culture. Everything we touch can change.

Feminism is transformative, there is no compromise. We hold these truths to be self-evident; that all women deserve equal pay for equal work, equal rights, reproductive freedom, and safe affordable contraception; that all human beings deserve equal rights regardless of color, sex, sexuality, religion, and economic status. Feminism is visionary, peace loving, all people deserve to live safely free from the fear of physical violence. Feminism is revolutionary of the people, by the people, and for the people, Humanity first, Earth first. This is what democracy looks like.