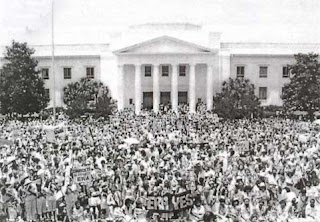 “The Great Change in America, that would trigger off a global revolution for justice, equality, and peace, came through what is now known as the WOMEN’S VOTE OF 2012. Chanting ‘RESIST, REBEL, REVOLT,’ thousands of women joined the April, 2012, march. By the August 18, 2012, march there were easily three million women in Washington, DC. The Women’s Vote of 2012 broke the back of the Republican Party, the women then took on the 1% and the long and arduous process of remaking the country began.”

Together we have the power to make the above true. MARCH!