Home » Unlabelled » Today's Reason To March - To Stop The AUL

Today's Reason To March - To Stop The AUL 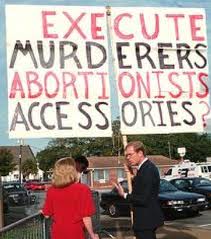 The nationwide juggernaut of anti-abortion legislation we witnessed in 2011, and are witnessing daily in 2012, is part of a perfectly coordinated and precisely executed strategy to chip away at abortion rights at the state level. It’s quite brilliant actually, why take on abortion at the federal level where a win is not guaranteed when with the right language in the right states, a win is guaranteed. This is the thinking of Charmaine Yoest, president and CEO of Americans United for Life. “You don’t have to overturn Roe to actually make progress at state level,” she said. The point is to make Roe “crumble under its own weight and become irrelevant.” This is why all the legislation you’re seeing is geared towards making abortion, a heart wrenching and remarkably hard choice to begin with, as horrifically difficult and humiliating as possible.

AUL, the legal wing of the pro-life movement and Charmaine Yoest, its President and CEO for the past three years, are the players behind the Congressional Investigation into Planned Parenthood and the bills for pre-abortion ultra-sounds, trans-vaginal ultrasounds, forced viewing of an ultra-sound, abortion waiting periods, parental notification, required viewing of state established anti-choice websites, re-defining gestation time, the question of fetal pain, abortion causes breast cancer lies, required pro-life counseling, and clinic regulations so restrictive that clinics have to close their doors. The effectiveness of the bills is due in large part to the language, what is called “model language” and that language is spelled out in AUL’s annual report, Defending Life: Proven Strategies for a Pro-Life American. Once the bill is written, and AUL will provide lawyers to help, it’s just a matter of getting it into the hands of a pro-life elected official, in a state friendly to anti-abortion measures, to move it through the legislature. Defending Life just happens to rate the states friendliest, and not so friendly, to anti-abortion legislature.

A married mother of five, a breast cancer survivor, a high-powered career – she testified against Sonia Sotomayor – Charmaine looks like the person you sold doughnuts with to raise money for your child’s class trip and comes across as the kind of reasonable, rational woman you’d believe if she warned you away from the produce at the store on the corner of Elm and Maple, in favor of the produce at the store on Main. Her appearance, her demeanor, her way of answering every question as if she is protecting and empowering women, perfectly masks the true thrust of the pro-life movement namely the harassment, coercion, and intimidation of women and the absolute annihilation of women’s reproductive freedom and choice. Charmaine Yoest is one of the female faces of the moral authority that is Patriarchy, a woman against the tribe of women.