Justice Ginsburg Sworn in 21 Years Ago

Thank you Justice Ginsburg for 21 years of looking out for us! 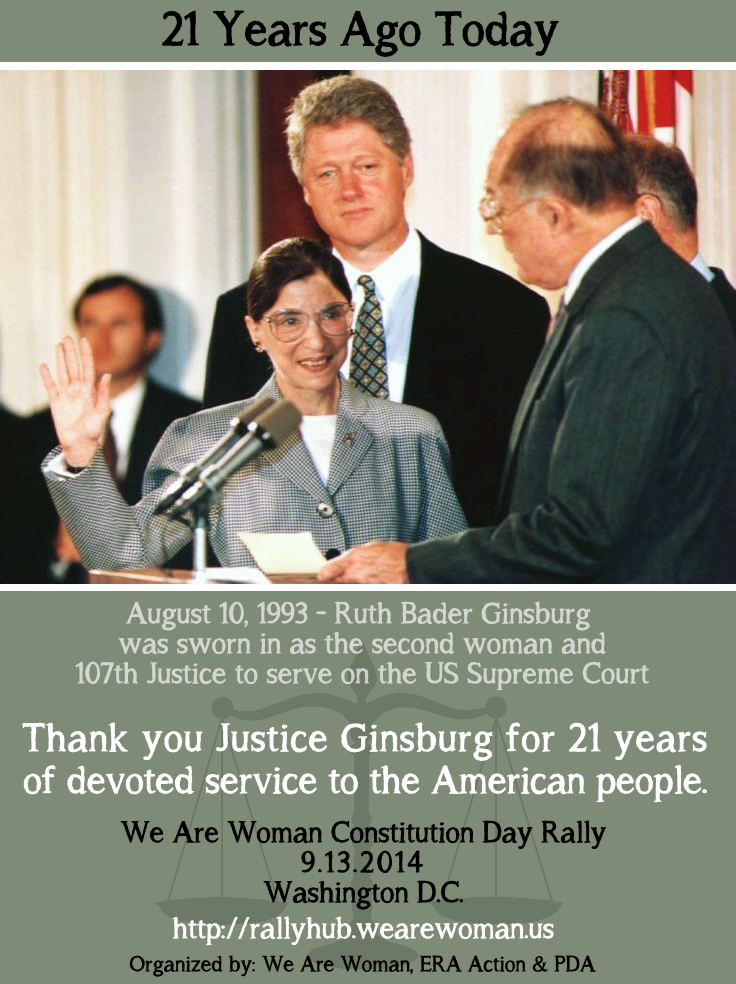 When Ruth Bader Ginsburg was sworn in as the 107th justice to the United States Supreme Court in August, 1993, she became the second woman to sit in this court (Sandra Day O'Connor was the first woman) and the first Jewish justice since 1969.

She was born on March 15, 1933, the daughter of Celia and Nathan Bader, in Brooklyn, New York. Nathan Bader was a furrier and her mother had a strong passion for reading, language and the love of books. Ruth Bader was one of two daughters; her older sister, Marilyn, died of meningitis and she was reared as an only child.

She was an excellent student in school, graduating at the top of her class in grammar school and an academic leader in high school. She was confirmed with honors from the East Midwood Jewish Center. Ginsburg was very active in high school where she played the cello in the orchestra, was a member of Arista, was a cheerleader and a baton twirler and the editor of her high school newspaper. Her mother died the day before she was to graduate from James Madison High School.

After earning her B.A. degree in government, in 1954, she married Martin D. Ginsburg, who had graduated Cornell the year before. He was called for military service the same year and they lived at Fort Sill, Oklahoma, for two years. It was during this period that Ruth Ginsburg experienced sex discrimination.

Following her graduation, there followed a succession of job experiences. She served as a clerk for Federal District Judge Edward L. Palmieri. spent two years on a Columbia Law School project, became the second woman to join the faculty of Rutgers Law School. 1963, and she tried many cases for the American Civil Liberties Union before the United States Supreme Court.

Ruth Bader Ginsburg was nominated by President Jimmy Carter to the United States Court of Appeal for the District of Columbia. She was sworn in on June 30, 1980, and served for thirteen years.

President Bill Clinton was confronted with a vacancy on the Supreme Court after Judge Byron R. White resigned. After three months of searching for a candidate, he nominated Ruth Bader Ginsburg. During her Senate confirmation hearings, she did not answer any questions concerning issues that were coming up before the court. Her nomination was approved by the Senate by a vote of ninety-six to three and she was sworn in on August 10, 1993.

Ruth Bader Ginsburg had to overcome many obstacles as a woman and as a Jew to achieve her success. She has paved the way for other Jewish women to move up the ladder of success.