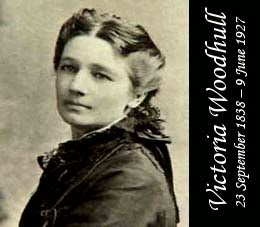 Woodhull was an advocate of free love, by which she meant the freedom to marry, divorce, and bear children without government interference. She was the first woman to start a weekly newspaper and an activist for women's rights and labor reforms. In 1872, she was the first female candidate for President of the United States.

Woodhull went from rags to riches twice, her first fortune being made on the road as a highly successful magnetic healer[1] before she joined the spiritualist movement in the 1870s.[2] While authorship of many of her articles is disputed (many of her speeches on these topics were collaborations between Woodhull, her backers, and her second husband Colonel James Blood[3]), her role as a representative of these movements was powerful. Together with her sister, she was the first woman to operate a brokerage firm on Wall Street, and they were the first women to found a newspaper, Woodhull & Claflin's Weekly.

At her peak of political activity in the early 1870s, Woodhull is best known as the first woman candidate for the United States presidency, which she ran for in 1872 from the Equal Rights Party, supporting women's suffrage and equal rights. Her arrest on obscenity charges a few days before the election for publishing an account of the alleged adulterous affair between the prominent minister Henry Ward Beecher and Elizabeth Tilton added to the sensational coverage of her candidacy. She did not receive any electoral votes, and there is conflicting evidence about popular votes.

Many of the reforms and ideals Woodhull espoused for the working class, against what she saw as the corrupt capitalist elite, were extremely controversial in her time. Generations later many of these reforms have been implemented and are now taken for granted. Some of her ideas and suggested reforms are still debated today.