Today's Reason To March - Because The Pill Is NOT An Abortifact 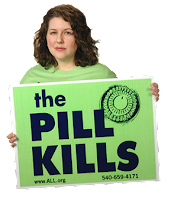 A lot has been written about Mike Kelly’s comment that August 1st, 2012, will live in infamy alongside 9/11 and Dec 7, 1942. As per the articles, Kelly is referring to the fact that as of today private health insurance companies and Medicare are required to cover FDA approved contraceptive services, for free, no co-pay, and this is as grave an attack on religious freedom as a surprise bombing that killed approximately 2400 people and yet another surprise bombing that saw hundreds of people crushed to dust and/or jumping out windows to their death rather than being burned alive. Obviously there's something off with the way Mike Kelly synthesizes his information.


That being said I went to his website and the reality is Kelly never used the word birth control in his press release, he didn’t even use the word contraception, the words he did use were “abortion inducing drugs.” Many of my colleagues, whom I deeply respect, have interpreted “abortion inducing drugs,” to mean contraception and they’re right but there’s more to it. The fact that Kelly used the words “abortion inducing drugs” reflects the blatant and largely ignored anti-birth control zeal that threads thick through the anti-choice movement and represents the argument that is going to be used by the anti-choice movement against the insurance mandate during the upcoming year. Namely the pill, despite overwhelming scientific evidence to the contrary is an abortifact, and birth control is sterilization. Obama's insurance mandate covers abortifacts and sterilization, thus the insurance mandate forces you to partake in the killing of babies and sterilizing women. I'm told lies, when you are doing God's work, are justified.


The religious fervor that drives the anti-choice movement scares the crap out of me.