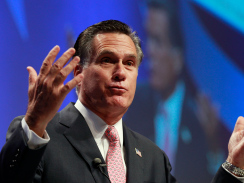 Conservative Republicans, specifically those heavily invested in the War on Women, are notorious for their contradictions.  For instance, anti-choice legislators say they want to eliminate abortion, but at the same time, they also want to restrict access to birth control and sex ed.  They claim to love freedom, yet they are unwilling to support marriage equality and other equal rights for LGBTQ individuals.  They tout the Constitution as sacred while ignoring the First Amendment's provisions for religious freedom.

Presumptive GOP presidential candidate Mitt Romney, infamous for waffling on serious issues like universal health care and abortion rights, recently found himself in hot water again.  This time, he declared support for his wife's work as a stay-at-home mom and then, a few campaign stops later, proclaimed that he would force mothers who receive welfare to take jobs so that they will have "the dignity of work."

There are several different angles from which we can examine these controversial statements, and none of them look very good for Romney.  Of course, they illustrate a classic case of a Republican inconsistency.  These politicians seem to place themselves and their families above reproach, so just because Mitt Romney accepts something as a good choice for his own family doesn't mean he won't judge you or me for the very same decision.  Don't bother seeking the approval of this incongruous candidate!

The "dignity of work" gaffe also demonstrates, once more, that while Republicans are eager to see us women get pregnant (and stay that way), they aren't interested in helping to make life easier for us or for the children we bear.  This isn't news.  Rather, it has been painfully evident in various measures that have attacked funding for public education and health care and painted single mothers as child abusers.

However, perhaps the most noteworthy issue raised by Romney's welfare reform statements is the issue of poverty.  Clearly, this GOP candidate - and his co-horts - support a double-standard that hurts poor women.  They would have us believe that when a wealthy businessman's wife devotes herself to child-rearing and home-making, she is doing respectable work.  Yet women in poverty who follow suit are without dignity; Mr. Romney would rather fund daycare than afford these mothers the opportunity to make the same choice Mrs. Romney made for her family.

Does he agree with the Wisconsin Senators who propose that single mothers are child abusers?  That could explain his eagerness to send their mothers to work, getting those children out of their homes and into daycares post haste.  Or is he simply so detached from the lower and middle classes that he cannot fathom us as equals, deserving of equal decision-making power and equally up to the task of providing loving, enriching environments for our children?  Any way you slice it, Mitt Romney's latest waffle turns our stomachs.
comments